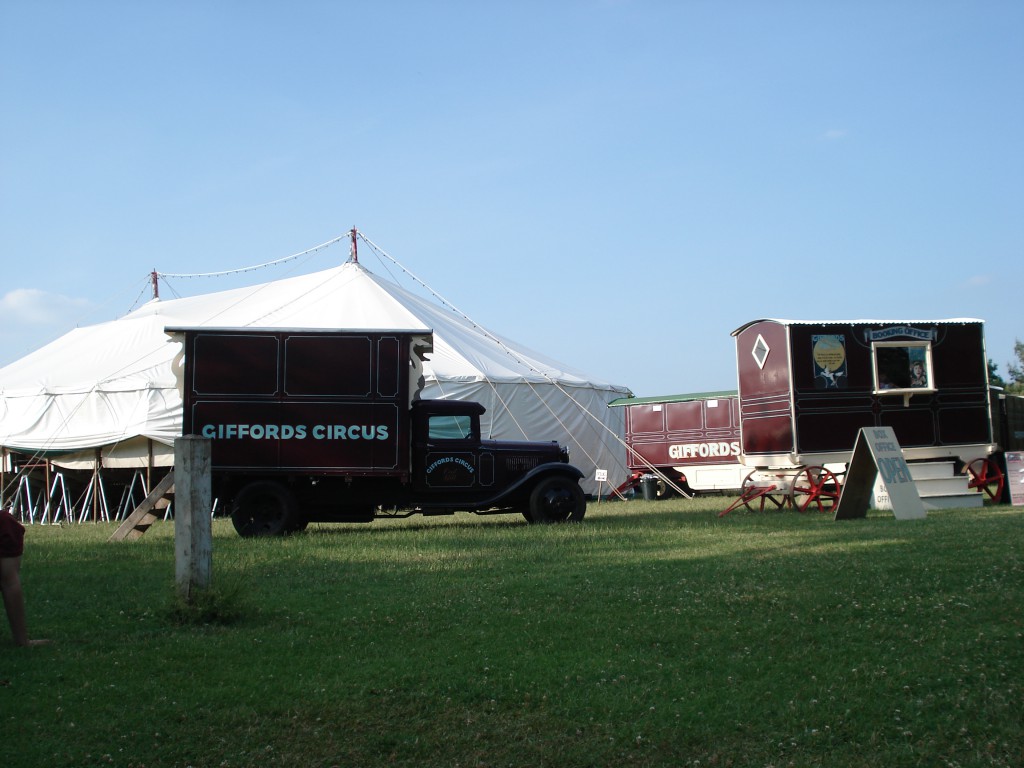 On Saturday we headed into University parks in Oxford to see the magical Giffords circus. My friend Zoe had invited a whole group of her friends as an early birthday celebration. Helen was the only one of the party to have seen Giffords before and she assured us we would not be disappointed! We arrived to find this wonderful musical organ playing the hits, I’ve always loved these. 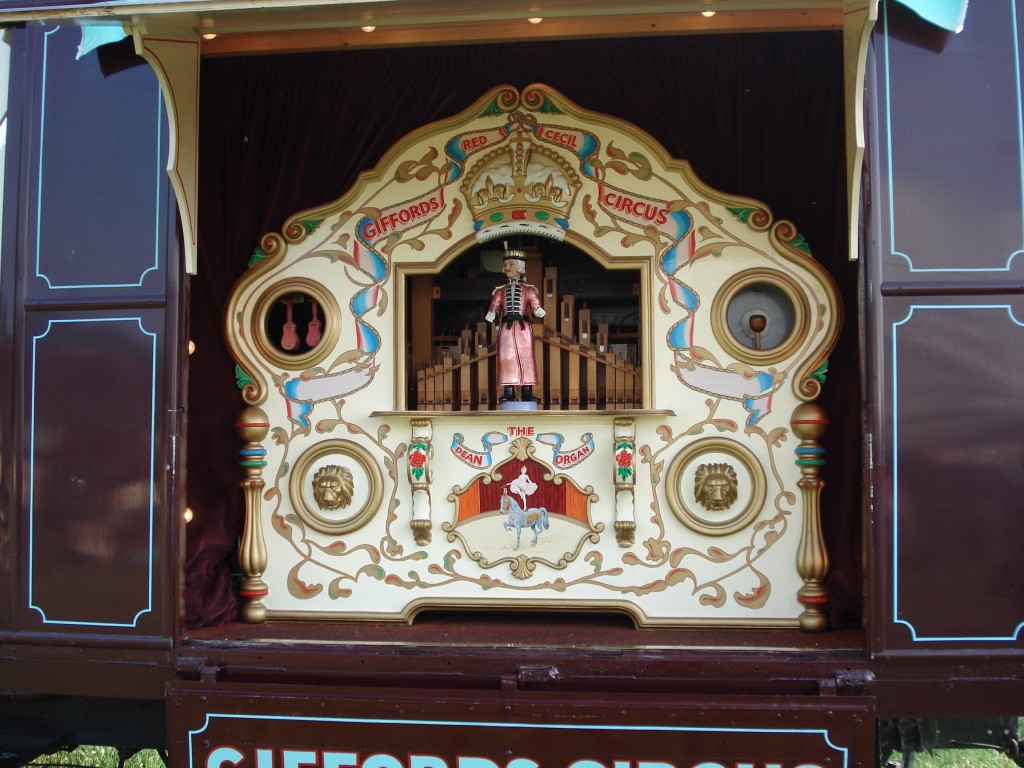 . Having read through the programme I now realise that Totti Gifford (who with his Wife Nell – the ringmistress – set up the circus) made all of the lovely burgendy vans, what a clever chap!. We collected our tickets and then entered the tent where to my delight there were a couple of chickens pecking about and a lovely donkey. 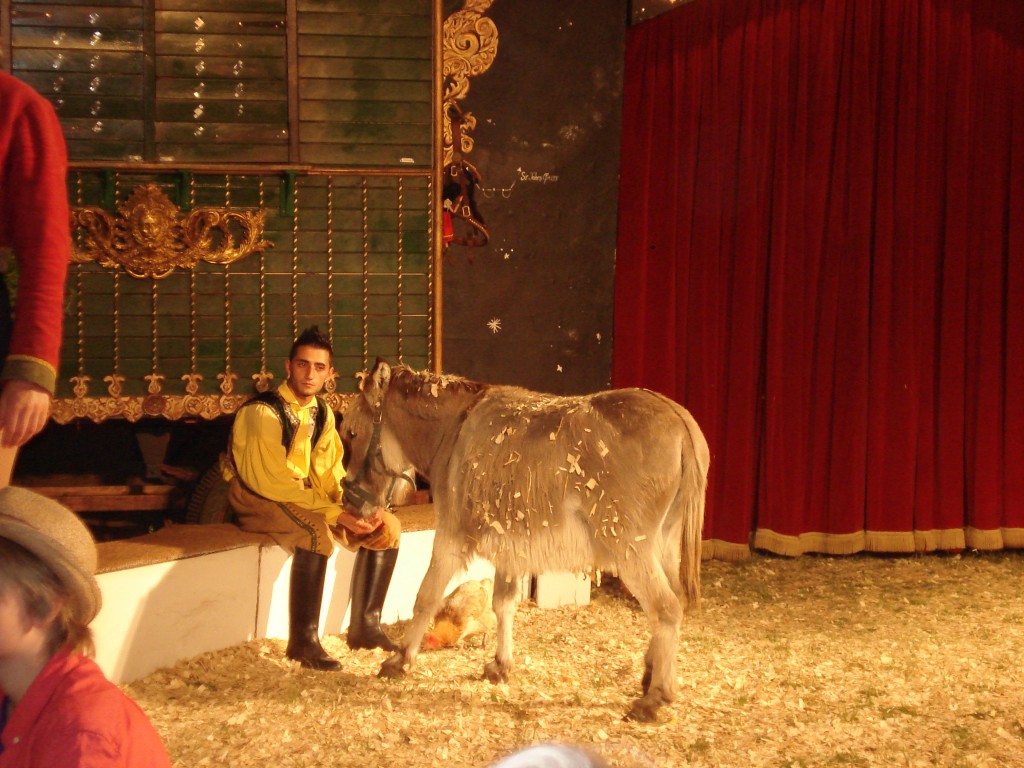 Pre show entertainment was provided by one of the youngest Giffords, Red who came out to round the chickens up, so cute! 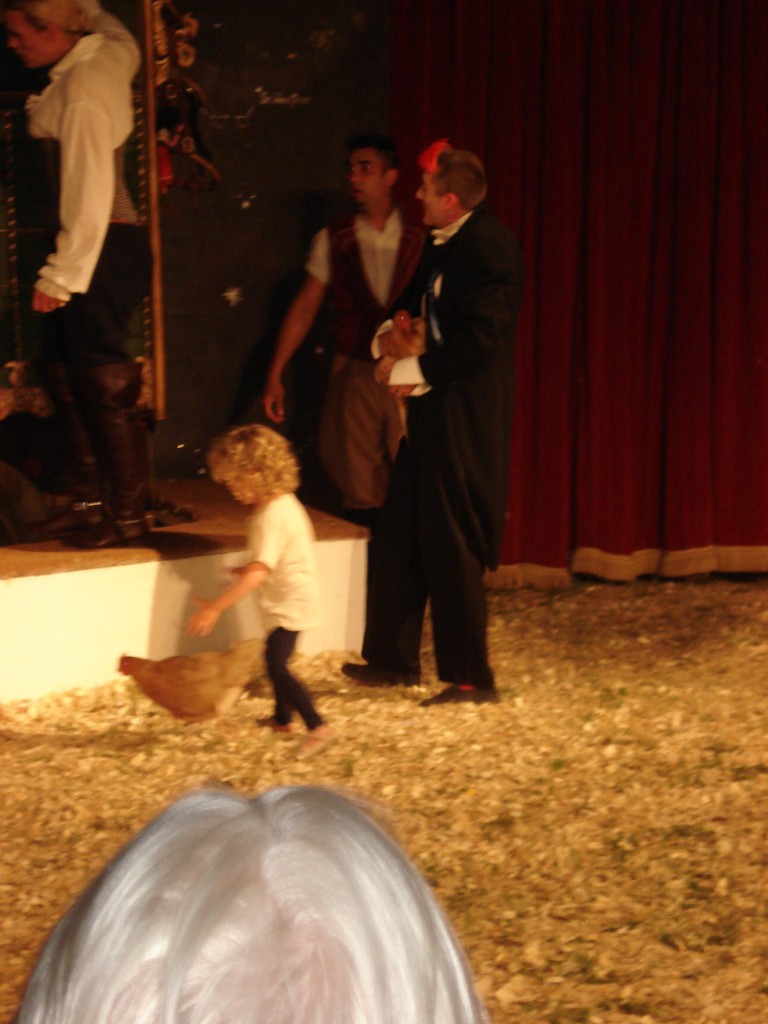 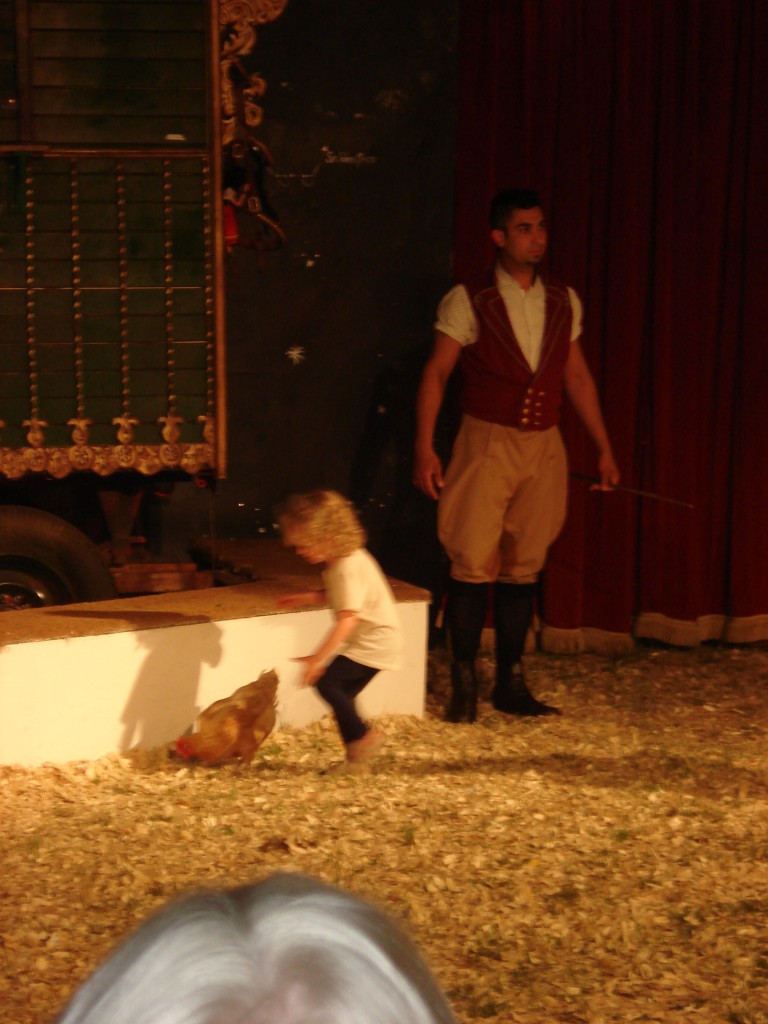 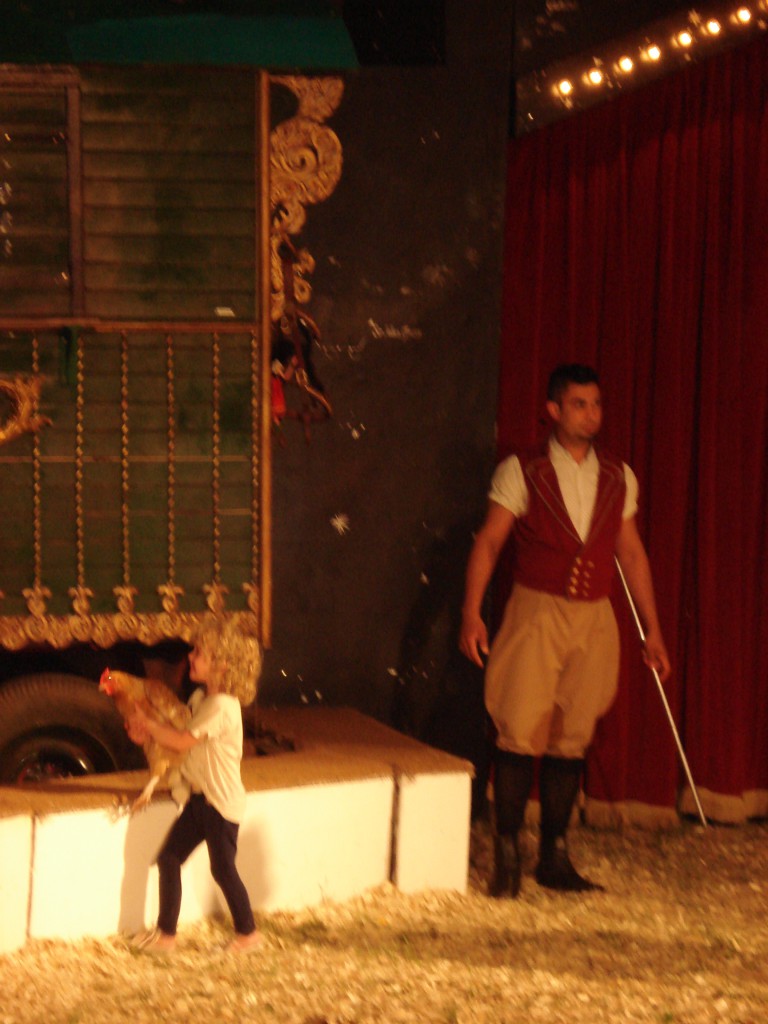 Got it! The chickens also featured in the first act with funny and un-terrifying clown Tweedy (who has a pet iron called Keef). 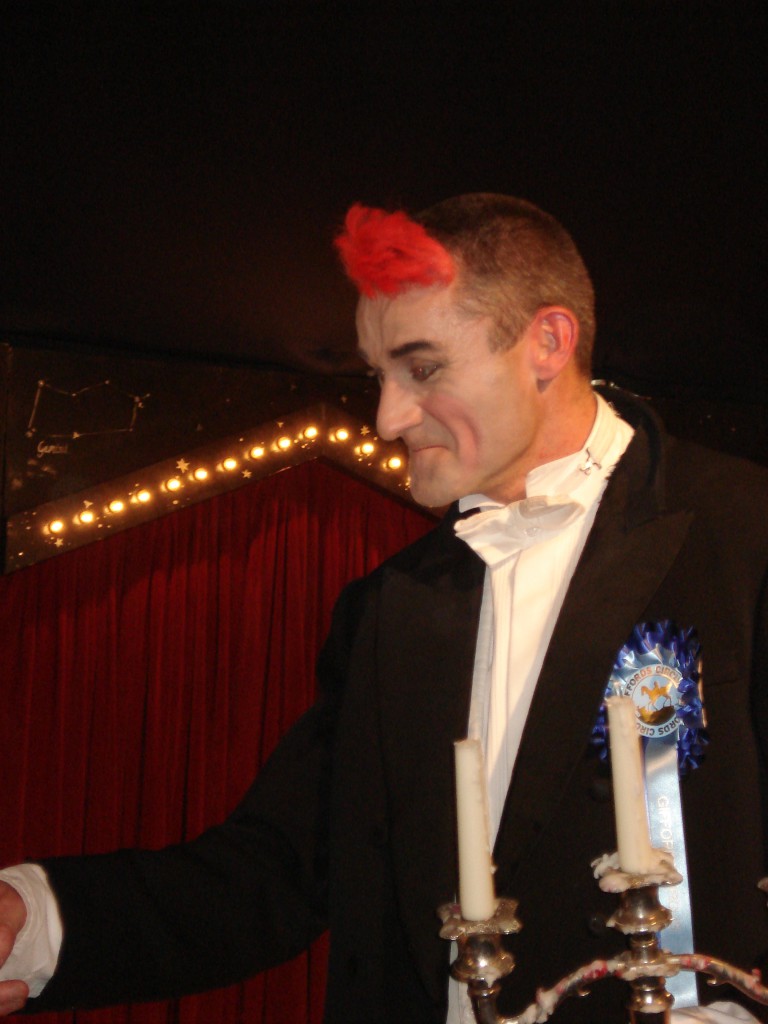 Here the chicken is enjoying her moment in the lime light with Tweedy. Clever chicken! 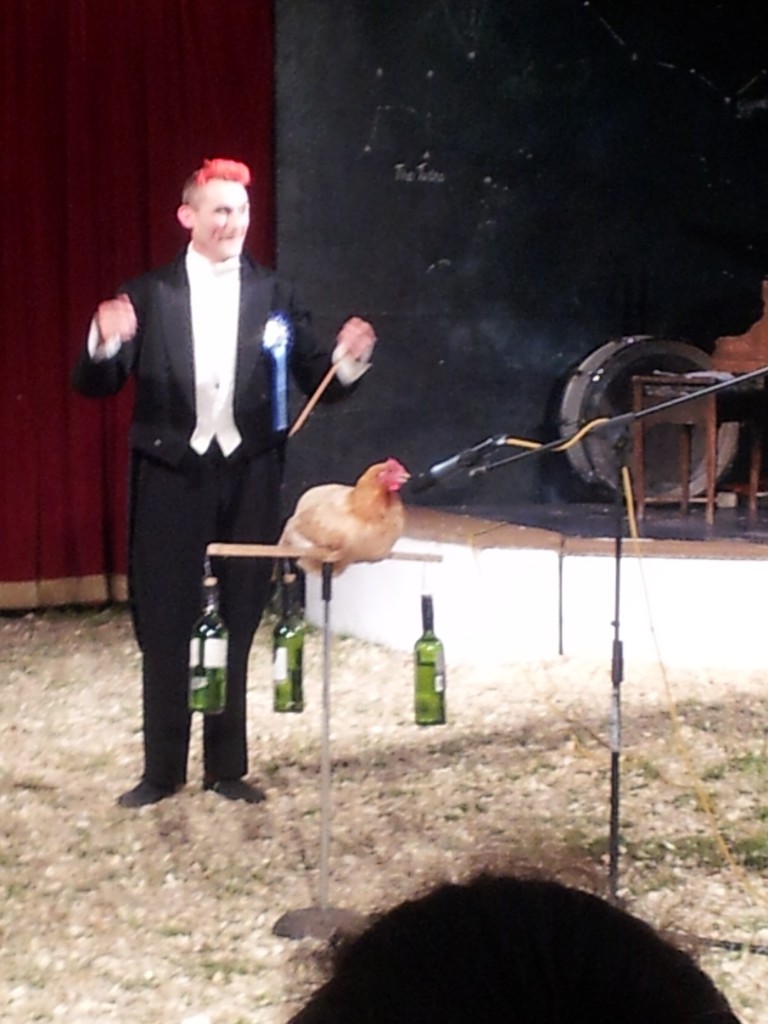 The show was called Lucky thirteen and centered around a Romanian raggle taggle circus who turned up in a beautiful painted caravan. The Romanian acts start to take over from the Giffords crew who have decided to opt for ‘the arts’ for their circus acts this year. As you would expect hilarity ensues: 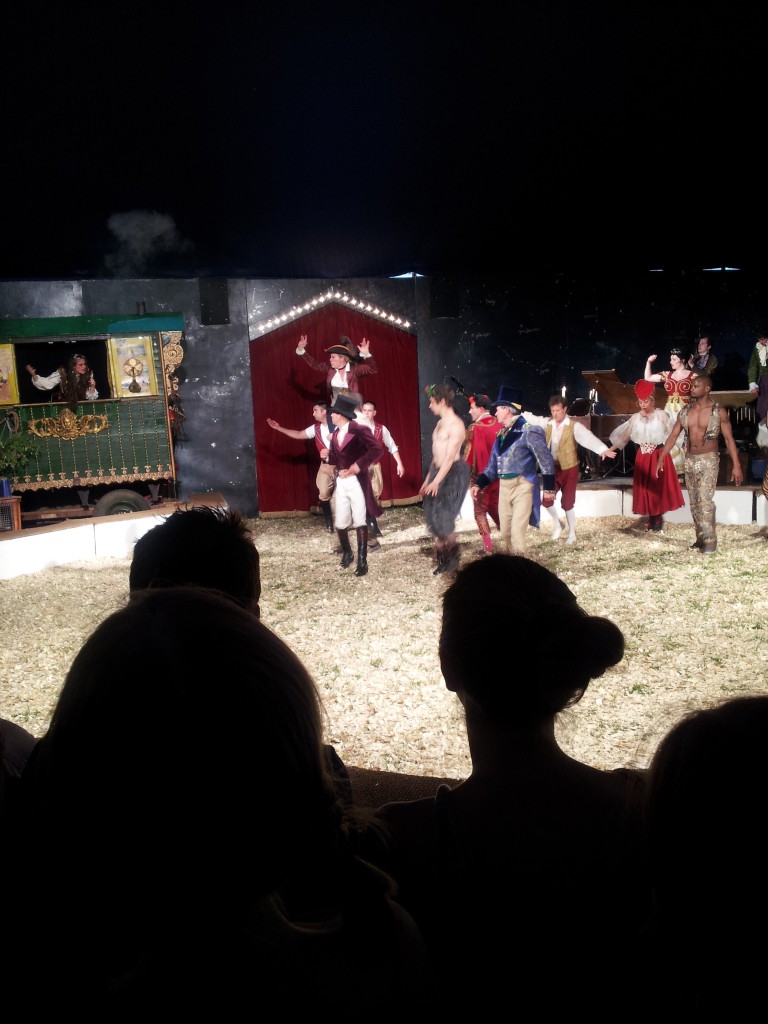 There was a vast list of many different acts however I seem to have only taken a few photos of them having been to enraptured most of the time to remeber I had my camera! This was one of our favourite acts, the tight rope walker Francois looked so at home on his rope, he was lying down and bouncing on it like it was a mattress (all while dressed as a faun/dryad in hairy trousers, he must have been quite hot!) . But he was amazing and Jam declared he was his favourite act. 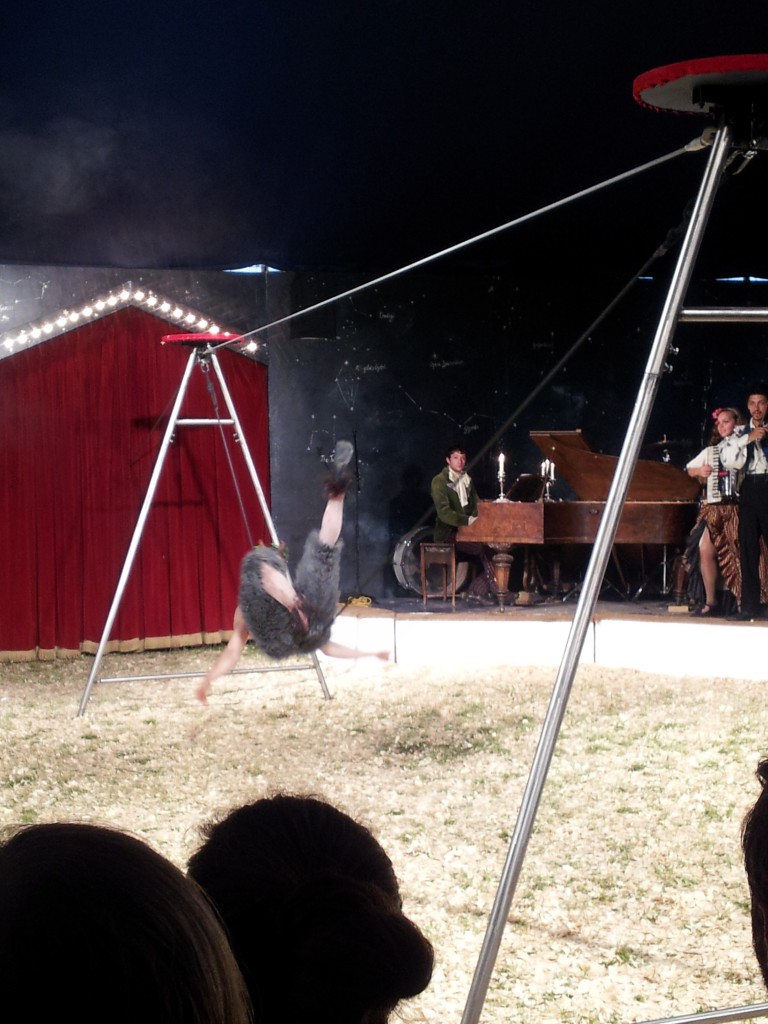 The next two I think were Zoe’s favourites, a couple of juggling brothers called Bibi and Bichu, They came out juggling fire (I tried to learn to juggle, just with bean bags a couple of years ago it was really hard) but these guys made it look  – with fire – really easy. Handling extra clubs thrown to them without breaking their pattern, very cool. 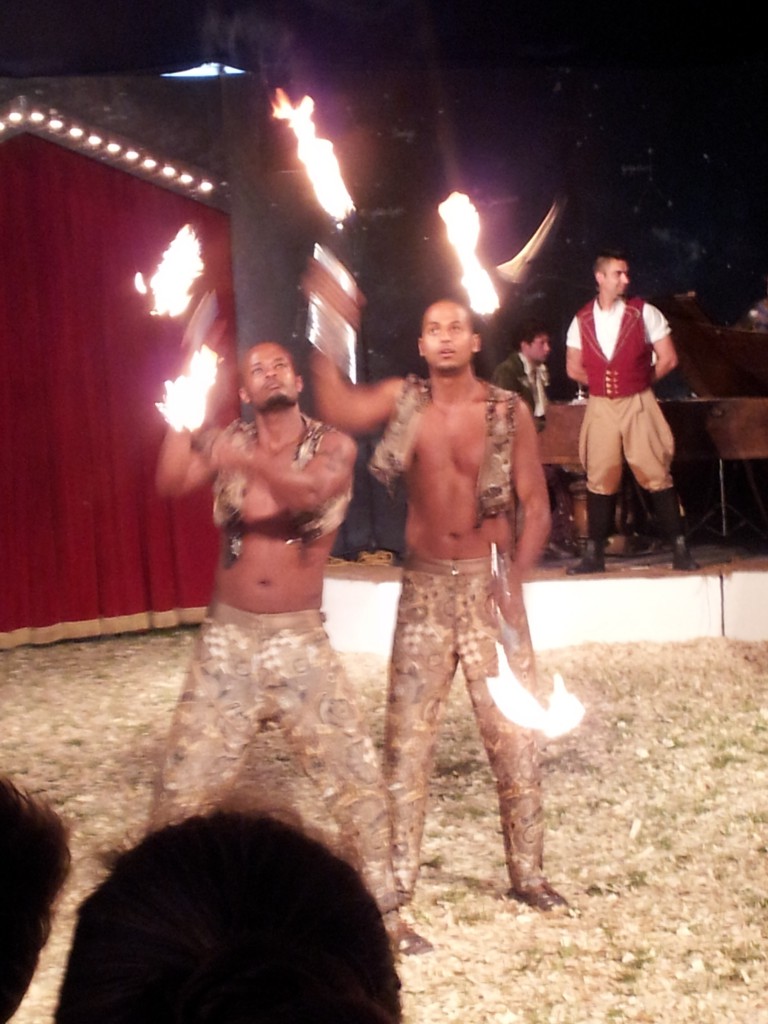 My favourite act however had to be the horses, some were ridden others used as pommels while riders leapt from one side to the other. All of them were beautiful animals and as you would expect all in tip top condition. They were a joy to watch. 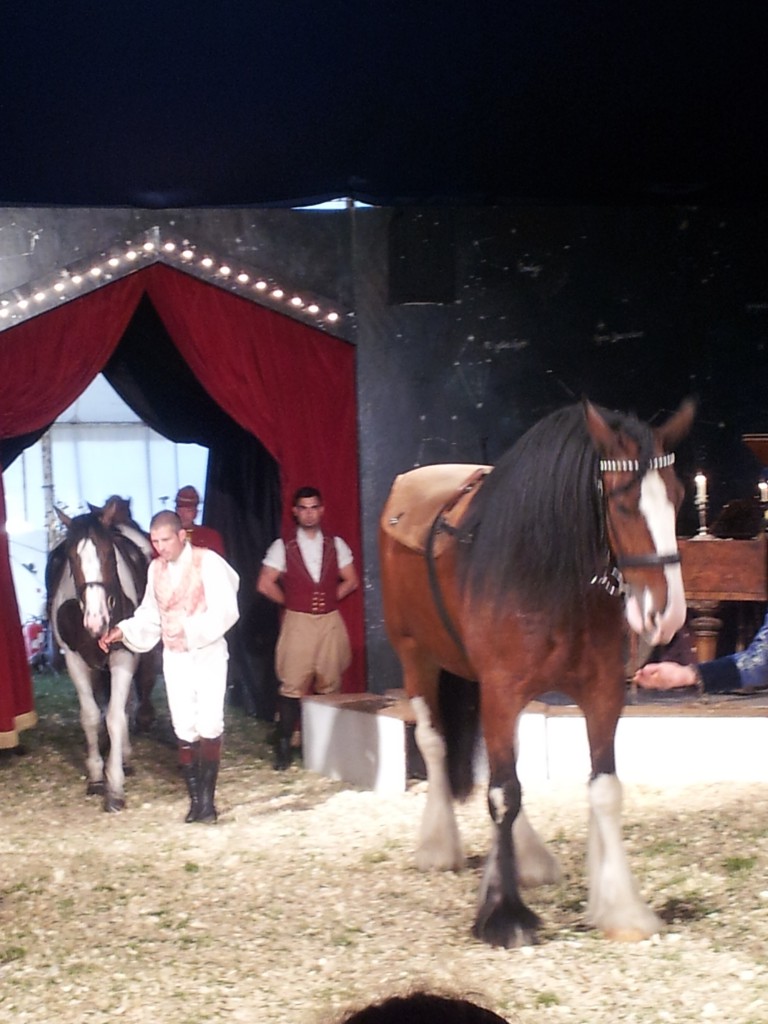 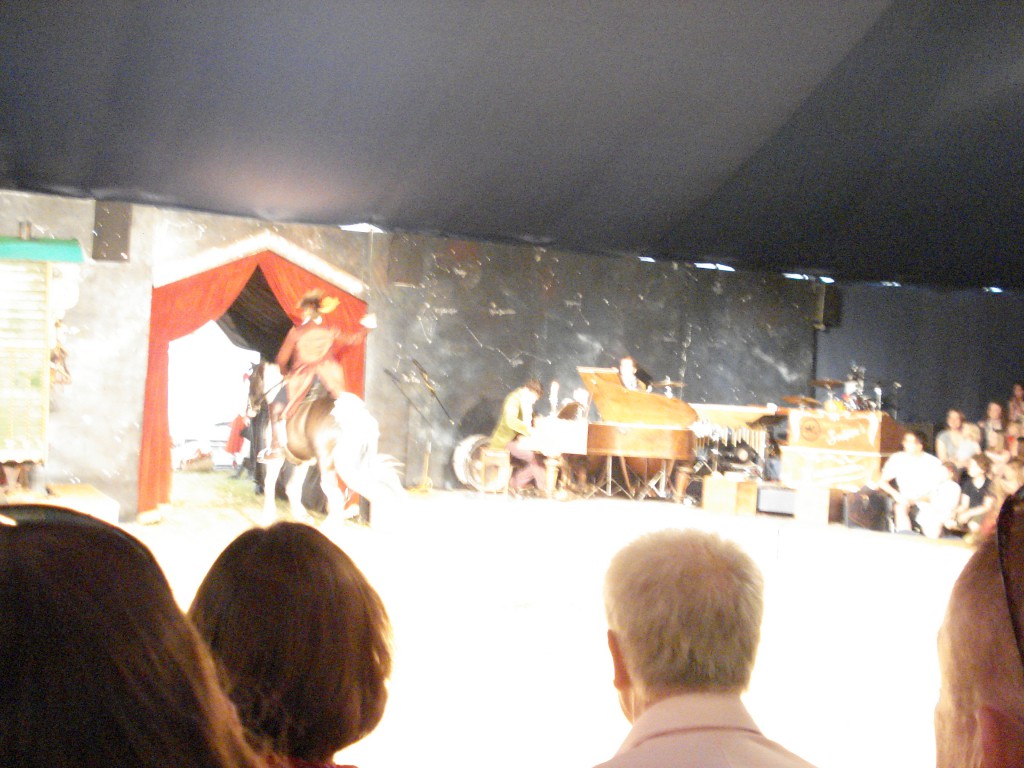 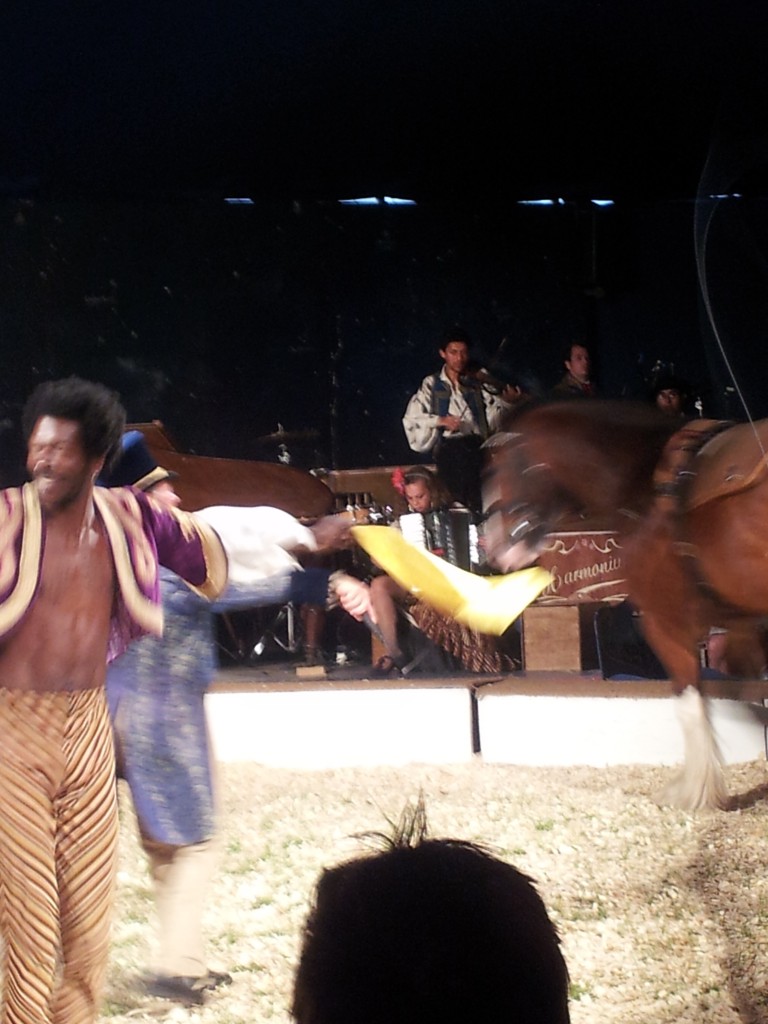 The finale came too soon, but what a finale it featured an acrobatic act called the godfathers from the Ukraine, they built towers with themselves, tumbled and generally got up to things to make us go ohhh a lot, they were brilliant. 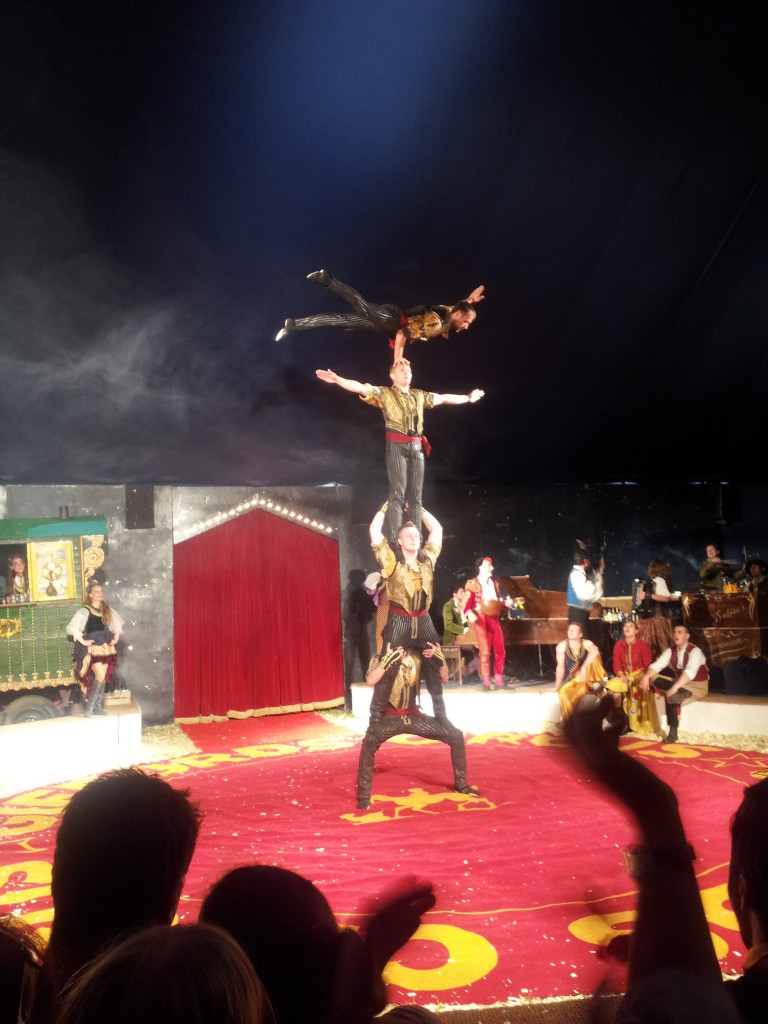 And in the finale all the other acts joined them. AMAZING! 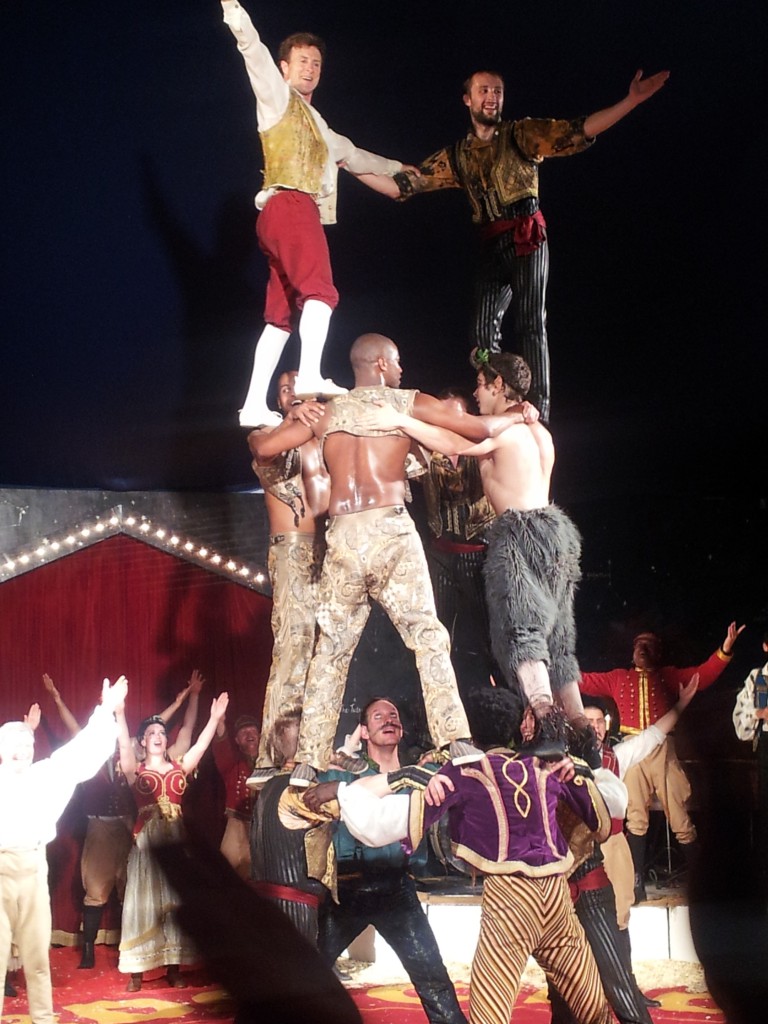 The music stopped and the acts headed off for a well earned rest, but our Giffords experience wasn’t over yet, we had booked to eat in magical twinkly circus restaurant Circus Sauce. It travels with the circus, cooking with local ingredients at the end of the evening show. As ringmistress Nell’s sister is Emma Bridgewater all the delicious grub is served on beautiful plates as well. This is us getting settled in to the wondrous surroundings. 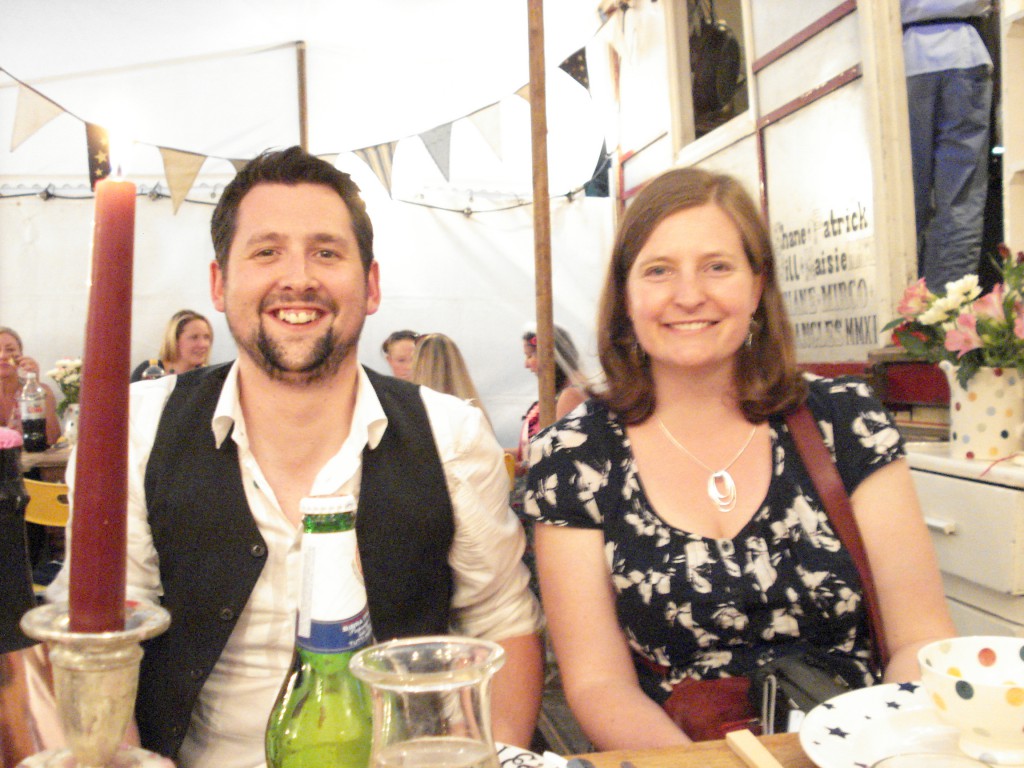 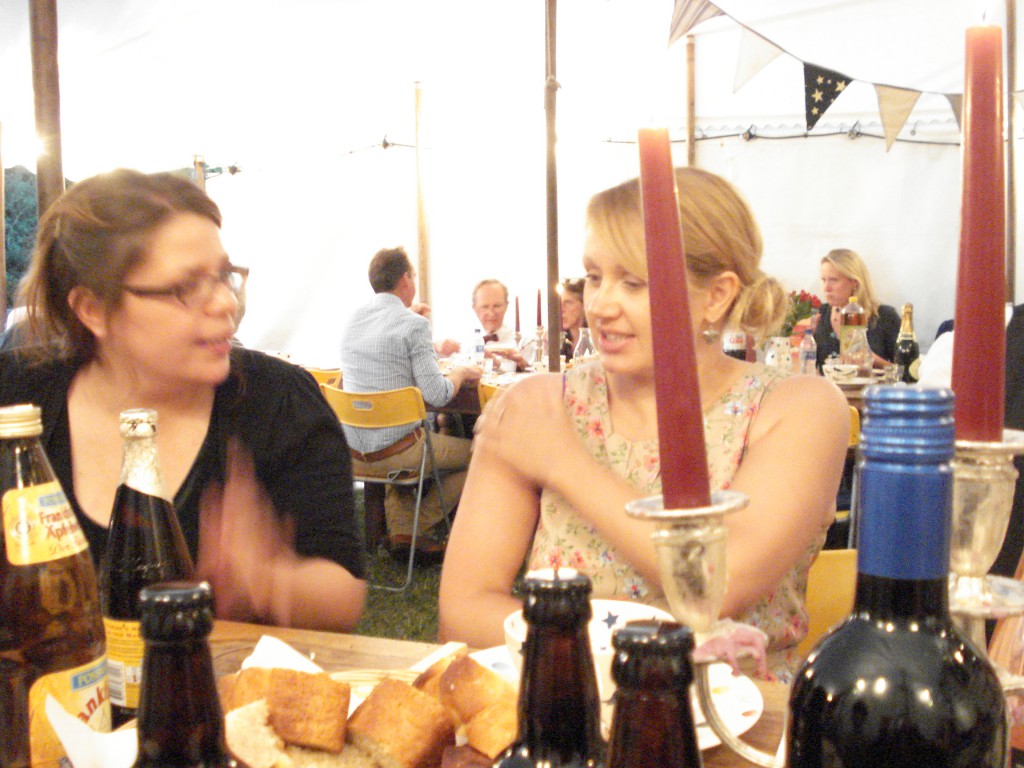 And then it was time for the food, our menu was as follows: 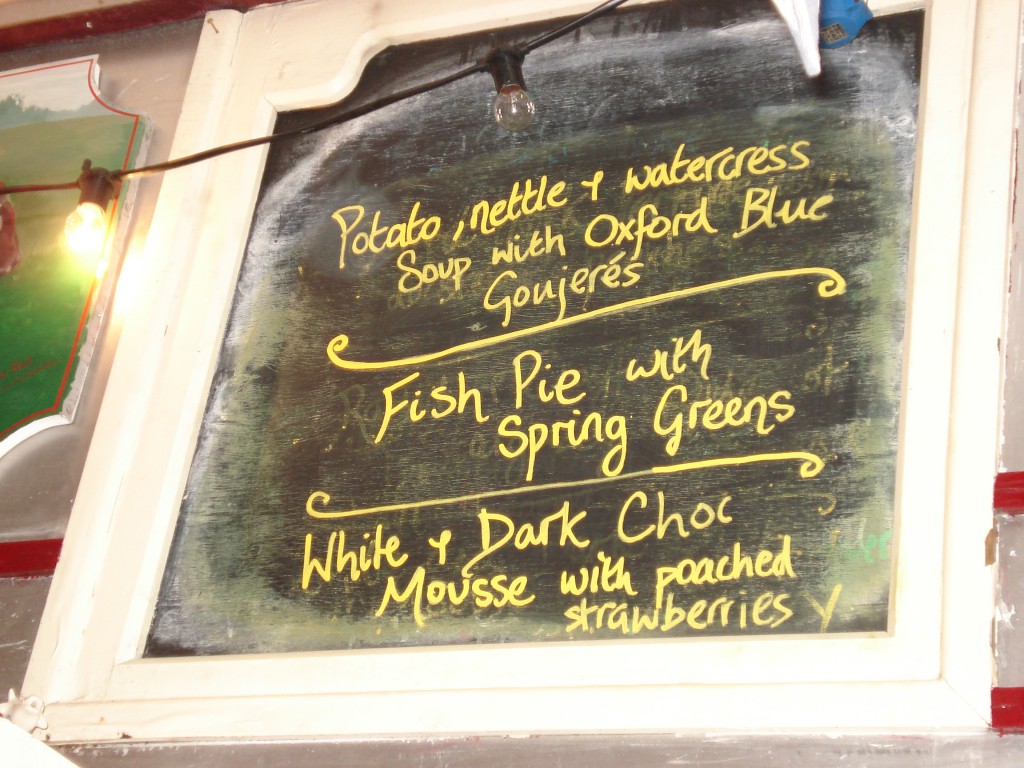 The starter was probably my favourite course although it was a close call as all the food we had was delicious, the Oxford Blue Goujeres were fluffy and tasty and disappeared in no time! 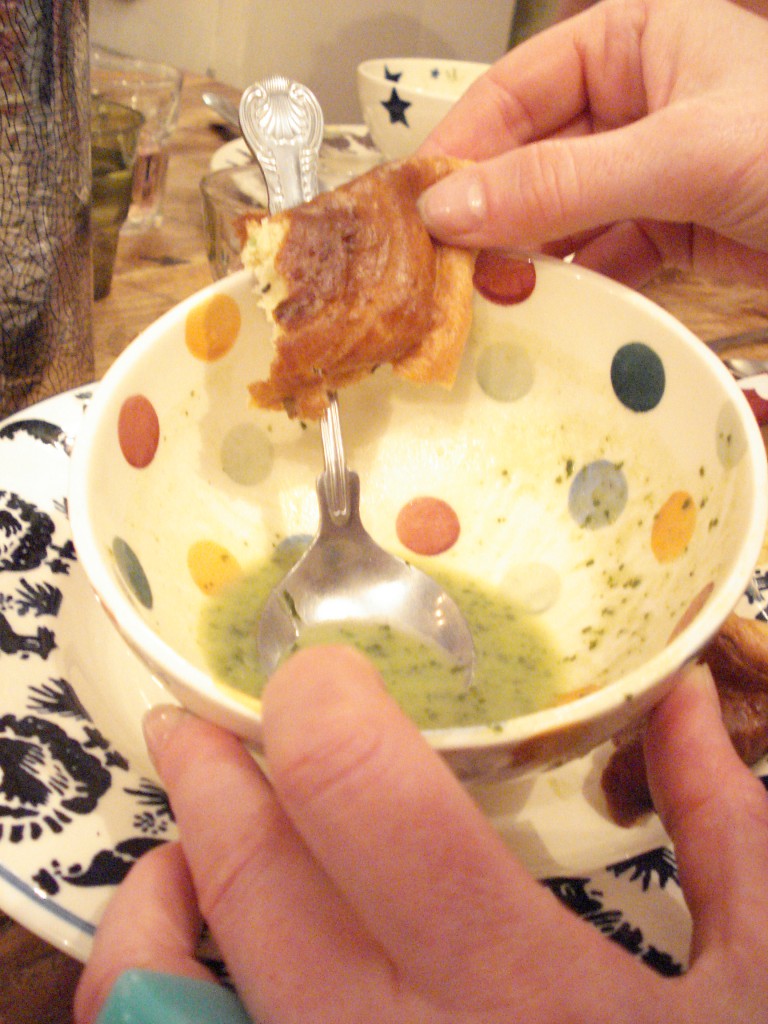 Then it was on to the main, a fantastic fish pie complete with Razor shell garnish & asparagus (if you can believe this it actually tasted better than it looked and by goodness it looked amazing). 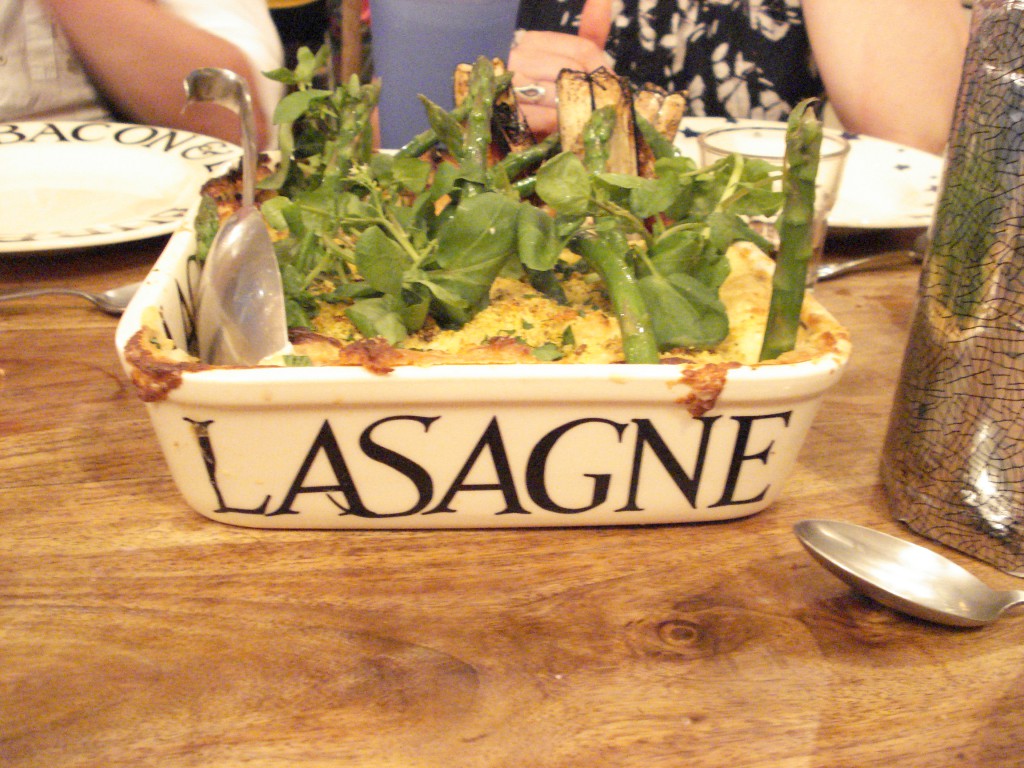 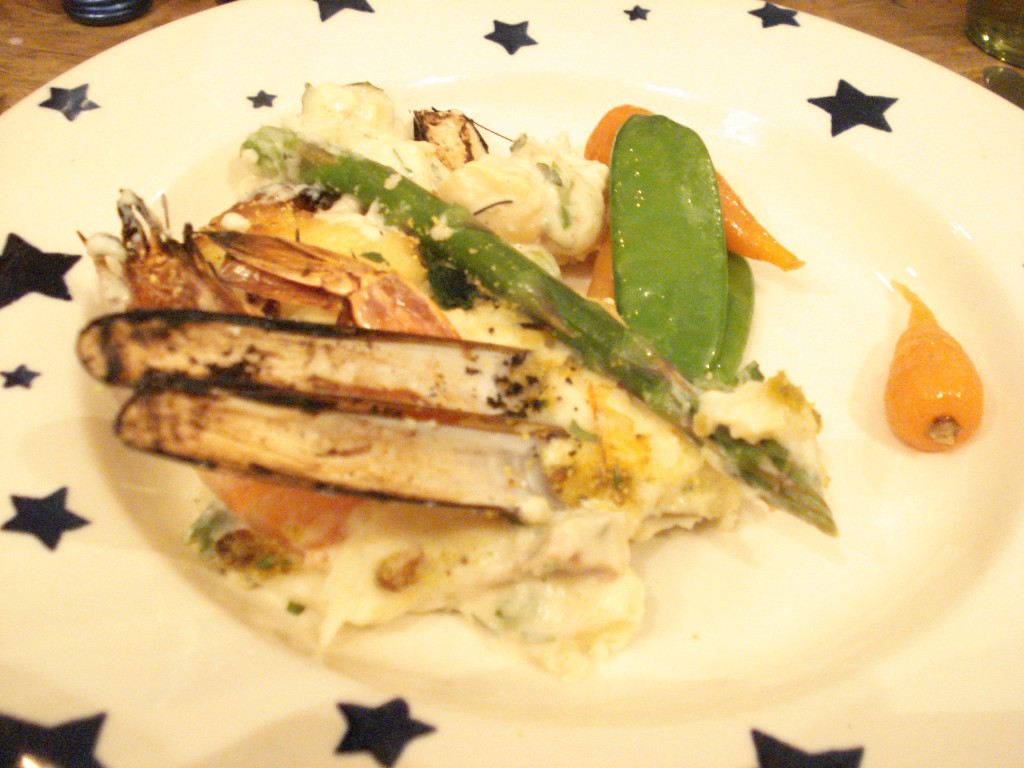 The others thought so too and this quickly followed…. 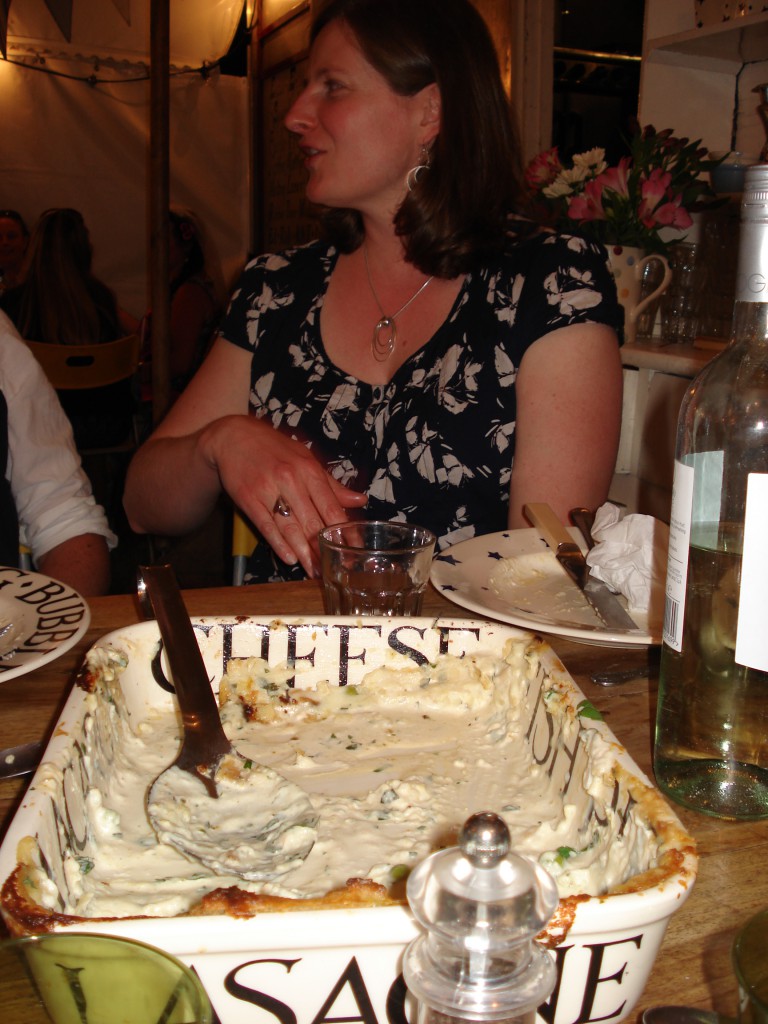 And then desert, an individual pot of mousse with poached strawberries. This looked fab but i really didn’t want to eat as I knew that after this my evening at Giffords would be over and we would have to return to the real world again. 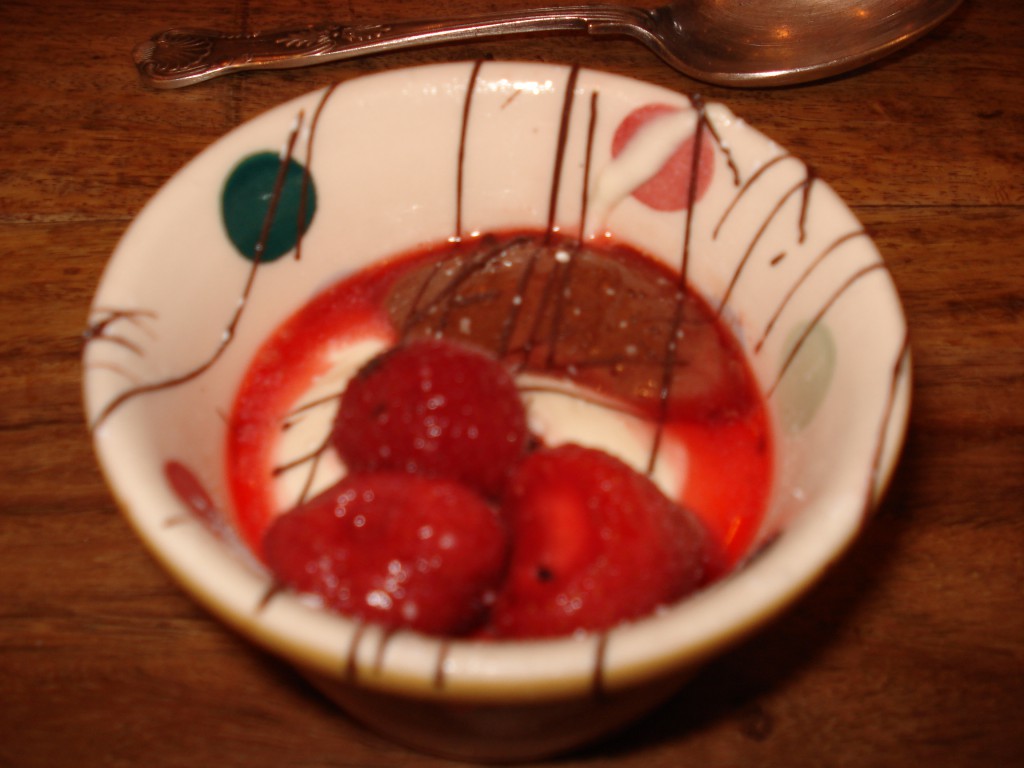 But all good things must end I suppose, and the chocolate definitely helped ease the blow 🙂 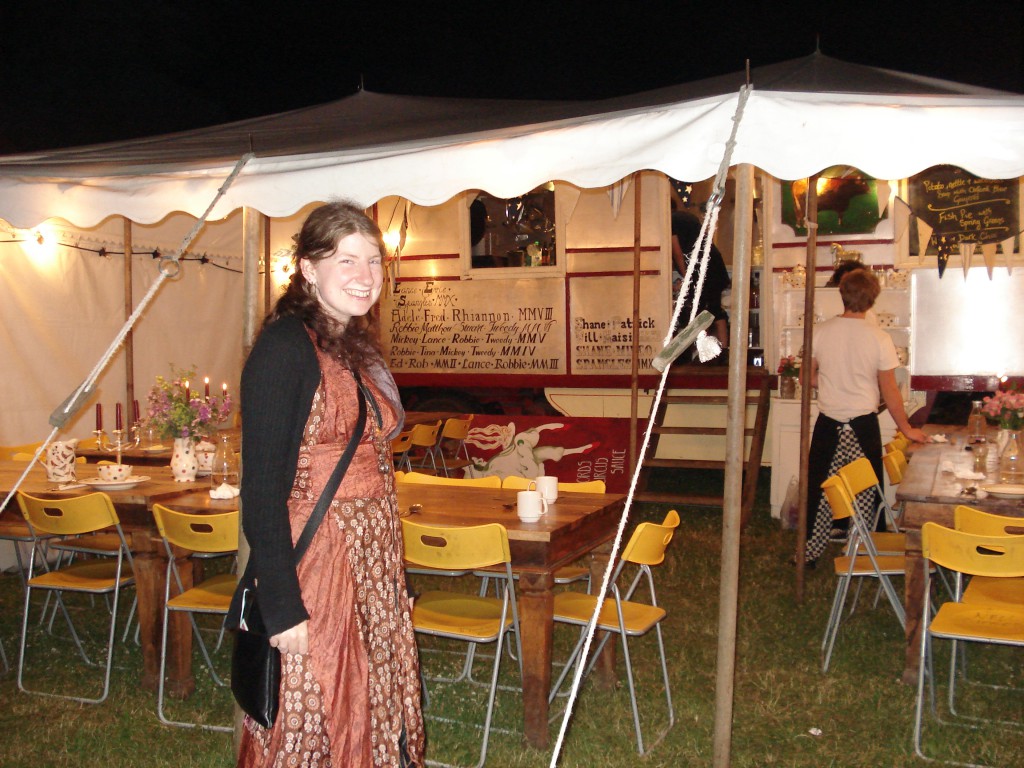 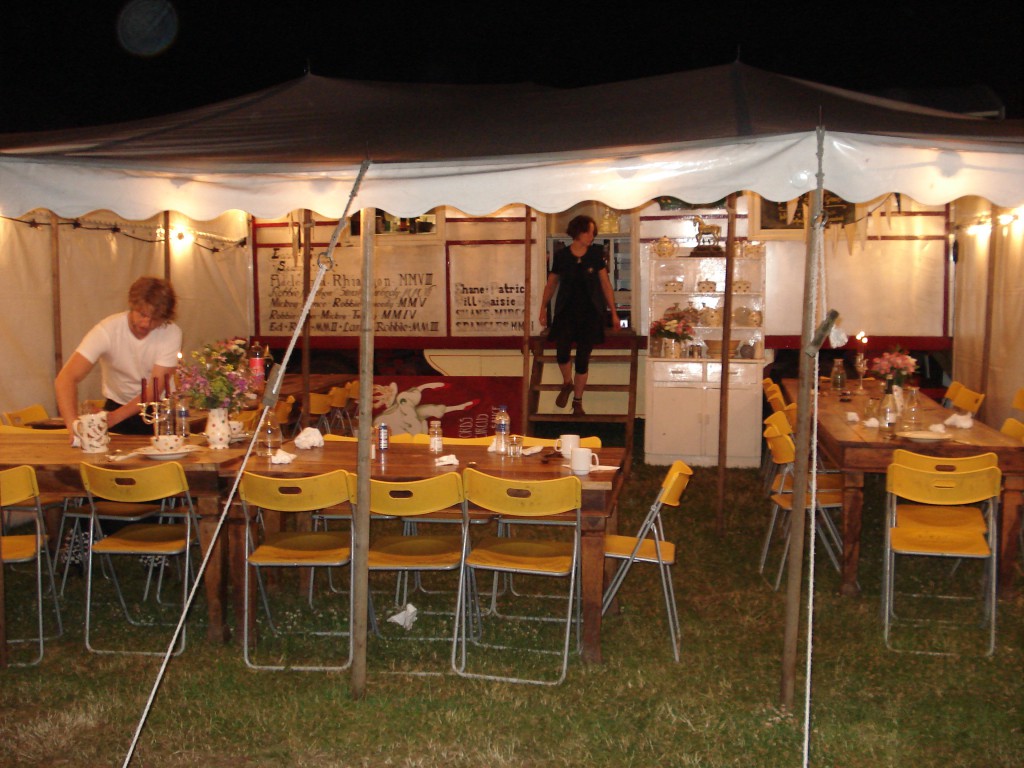 And so circus sauce packed up for the night and we headed back into town to catch our respective buses home. But before we left I just had time to capture a last view of the big top, The lights on top of it twinkling against the blackness, a beacon for all circus lovers. 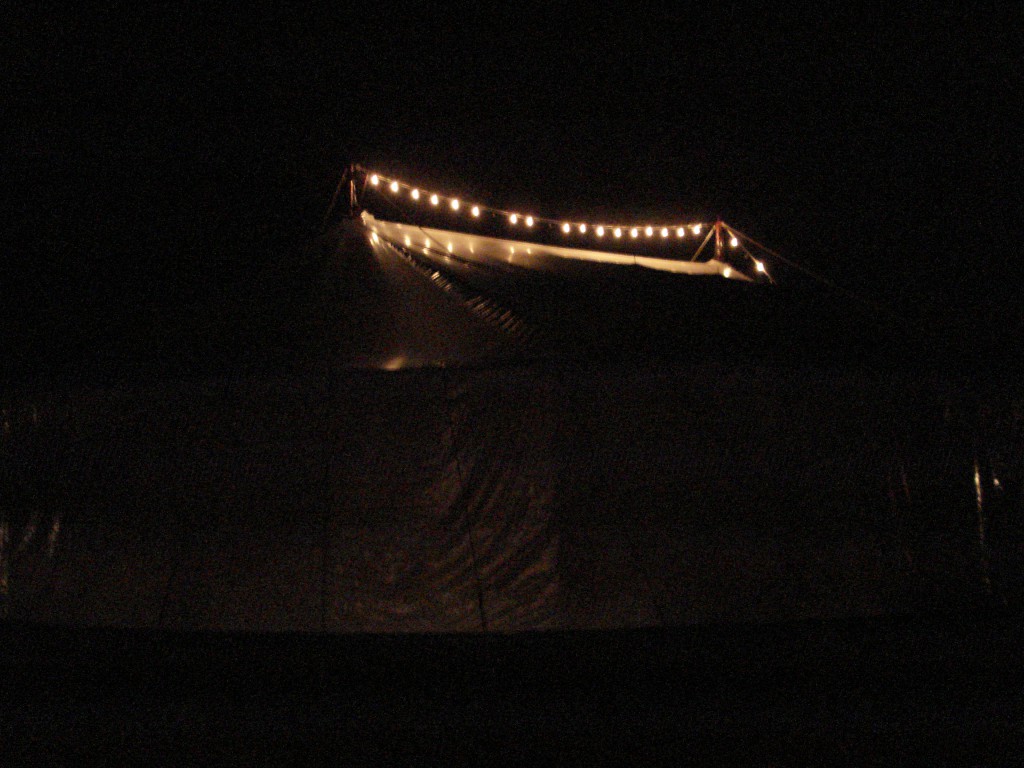 So we came back to reality but I still have the fondest memories of Giffords, a programme containing all the amazing performers and last but no means least this beautiful Giffords mug. 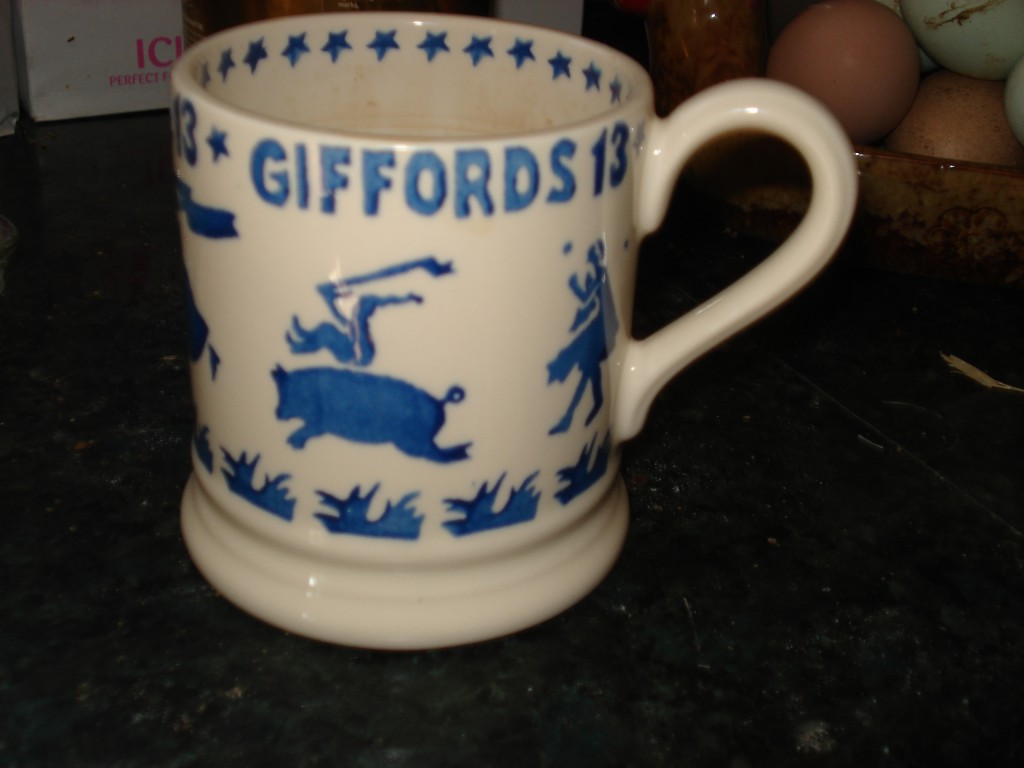 I’m drinking my coffee from it this morning dreaming of the day when I can get good enough at anything to run away with the circus. Until then I’ll be checking their blog for news and eagerly awaiting the wagons rolling into Oxford next year. Something to look forward to indeed! www.giffordscircus.com