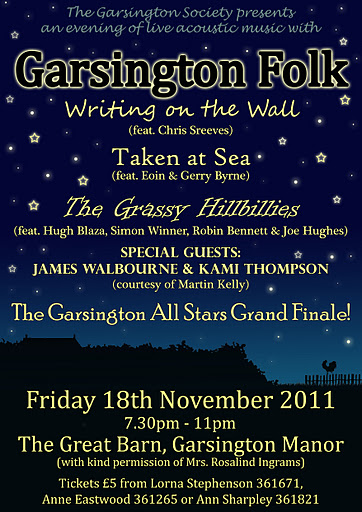 This has just dropped into my inbox, the official poster for the gig that Writing on the Wall (otherwise known as the fabulous band what I am in) are playing in about a week and a half. Also on the bill is Robin Bennett’s new country band the Grassy Hillbillies (‘locals’ may recognise the name as Robin and his brother Joe are responsible for running local fab festival Truck, Robin was also described by one of my friends as the batman of cool, so there you go!). The other bands we haven’t encountered yet but I can give a small sneak preview of the finale (well the song at least) here it is sung by folk legend John Coppins . Be lovely to see some of you there!

1 thought on “Gig in Garsington”