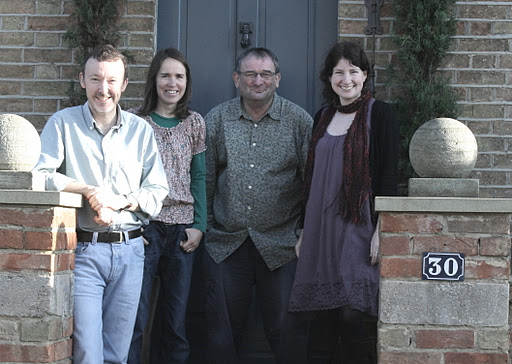 So having mentioned the gig in Garsington it dawned on me that I had actually forgotten to mention that the number of musicians in Writings has actually doubled since our first gig in April. I was waiting till I had some decent practice shots or better than that some demos to post here but we’ve been so busy practicing there has been no time for photos.  Plus recording has been postponed till after Christmas because of an interesting possible development of which alas I am not yet permitted to speak of… Anyway the two nw members are my friend Emily (who I met while building a newt house post here) and Kevin who I used to play alongside in Stranger things happen at sea. As is so often the case with these things the whole process of expanding the band happened quite organically with people we already knew who had simular ideas about the kind of music they wanted to create, but I think Emily and Kevin will also bring their own ideas and style to the table as well. This weekend was our final practice before the Garsington Gig (we are playing quite a bit of the material which received its debut in April but all of it has had to be rearranged to make the most of the expanded line up (my favourite bit has to be when Emily takes one of my tunes on the cello, it just sounds beautiful). After a hard (timed) practice we had a bit of a relax and as it was all lovely and autumnal outside it was decided an updated band photo was in order so left to right Kevin (violin), Emily (cello), Chris (melodian, piano, everything), me (viola/violin/vocals) all stood outside Chris’ house in Garsington (the reason I’m beaming is that Julia Chris’ most excellent wife had just plied us with tea and cake, yum!) This one was eventually ruled too dark so the official photo is here and will hopefully be used to promote the band in all future endevours! 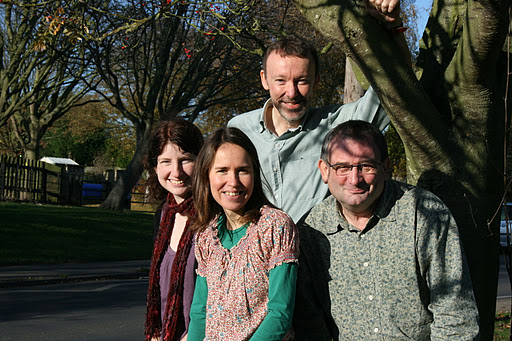 Keep calm and ceilidh on!